24 April 2013 - Finished at last
On 17 March finally put it all together and ran the car  - albeit still on the jack stands. Thanks to Eric from AEVA who helped put the wiring together & provided me with circuitry to both make the heater work properly  , but also fabricated a dual diode & inductor on DC-DC charger, to prevent reverse draw from 12v battery to main pack.
Subsequent to then I had to completely pull down the dash again to get the ceramic heather out as there was smoke when I turned the heater on.
Eventually I removed all of the high temp silicone ( good as gasket in ICE engines but not so good in this situation) , and replace with Clipsal's fire proof mastic . Not as good a material to hold things in , but doesn't smoke!
Lastly I couldn't get the after market tacho to work on the NPN sensor that was attached to the shaft of the electric motor. Once more Eric to rescue with a resistor to act as a "pull down" resistance.

Stickers placed all over the place & Perspex guards fabricated to prevent unwanted shorting.
Runs great, though road noise m(whirring etc) is a distraction and hopefully will quieten down.  Also the AM side of the radio gets a lot of electrical interference. May have to come up with some form of shielding to improve that.
﻿ 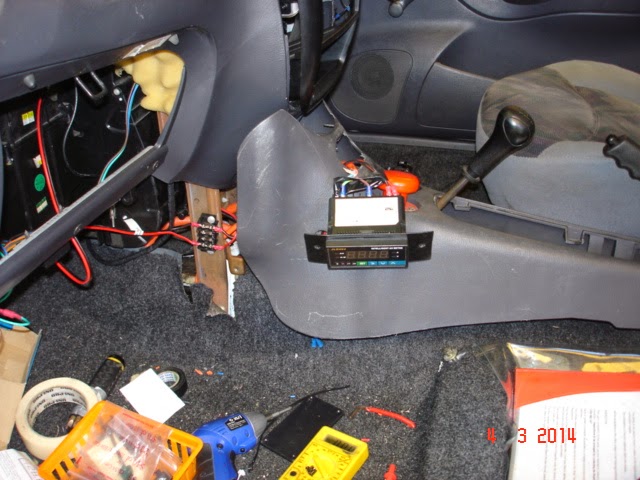 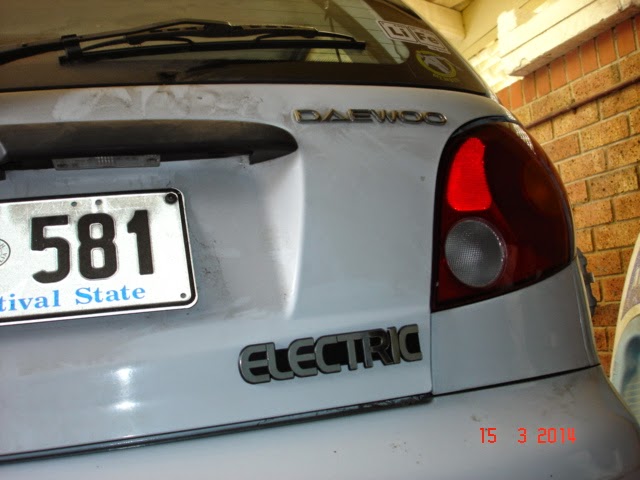 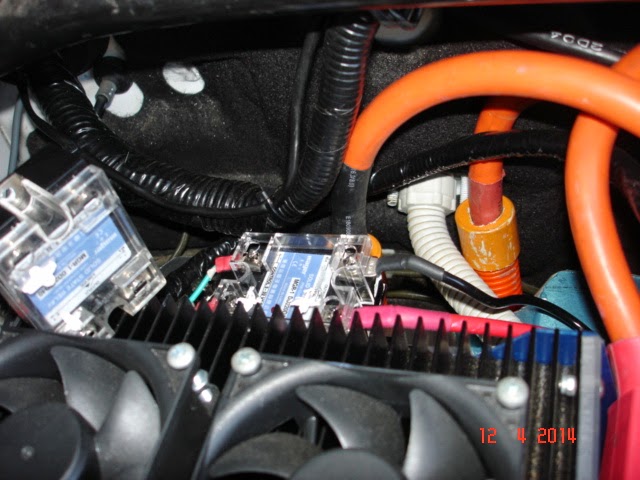 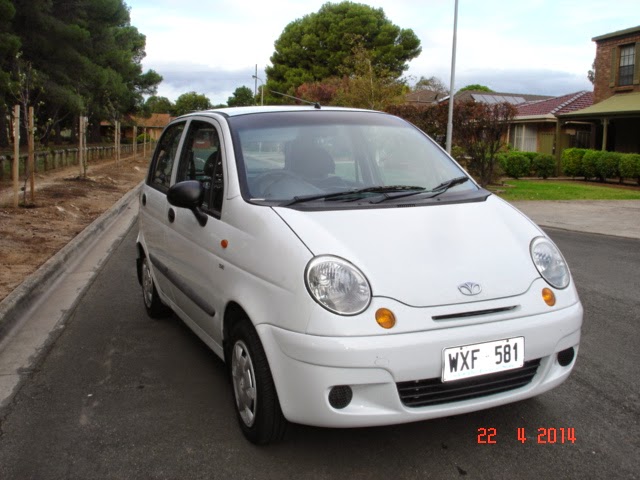 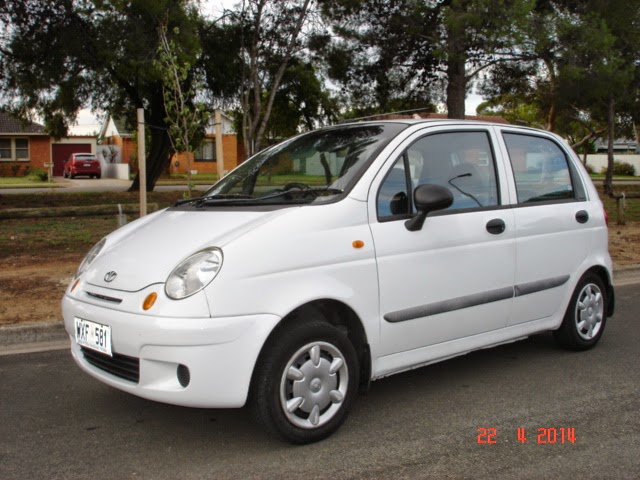 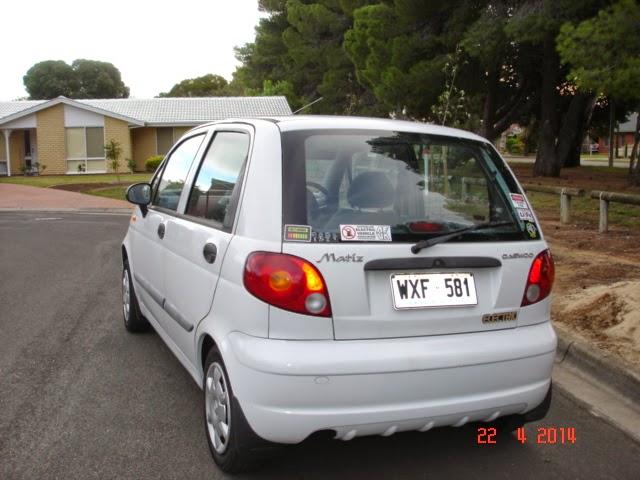 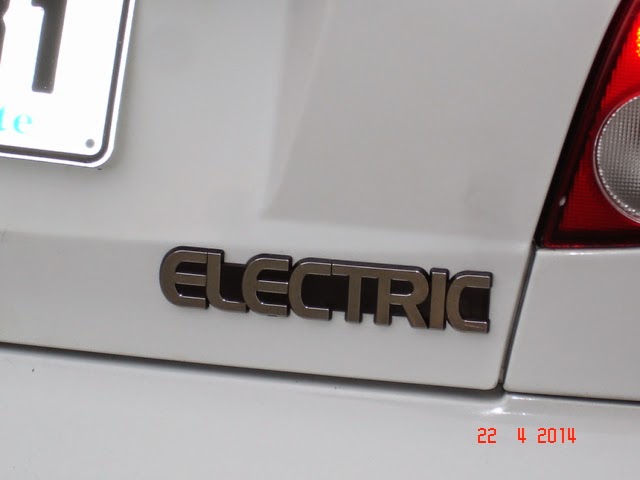 23 Feb 2014 - Hardware basically all connected and thanks to Eric, who noticed I had the connections for pre-charge on the contactor backwards, all the rest appears correct.
Also completed a splash guard today. 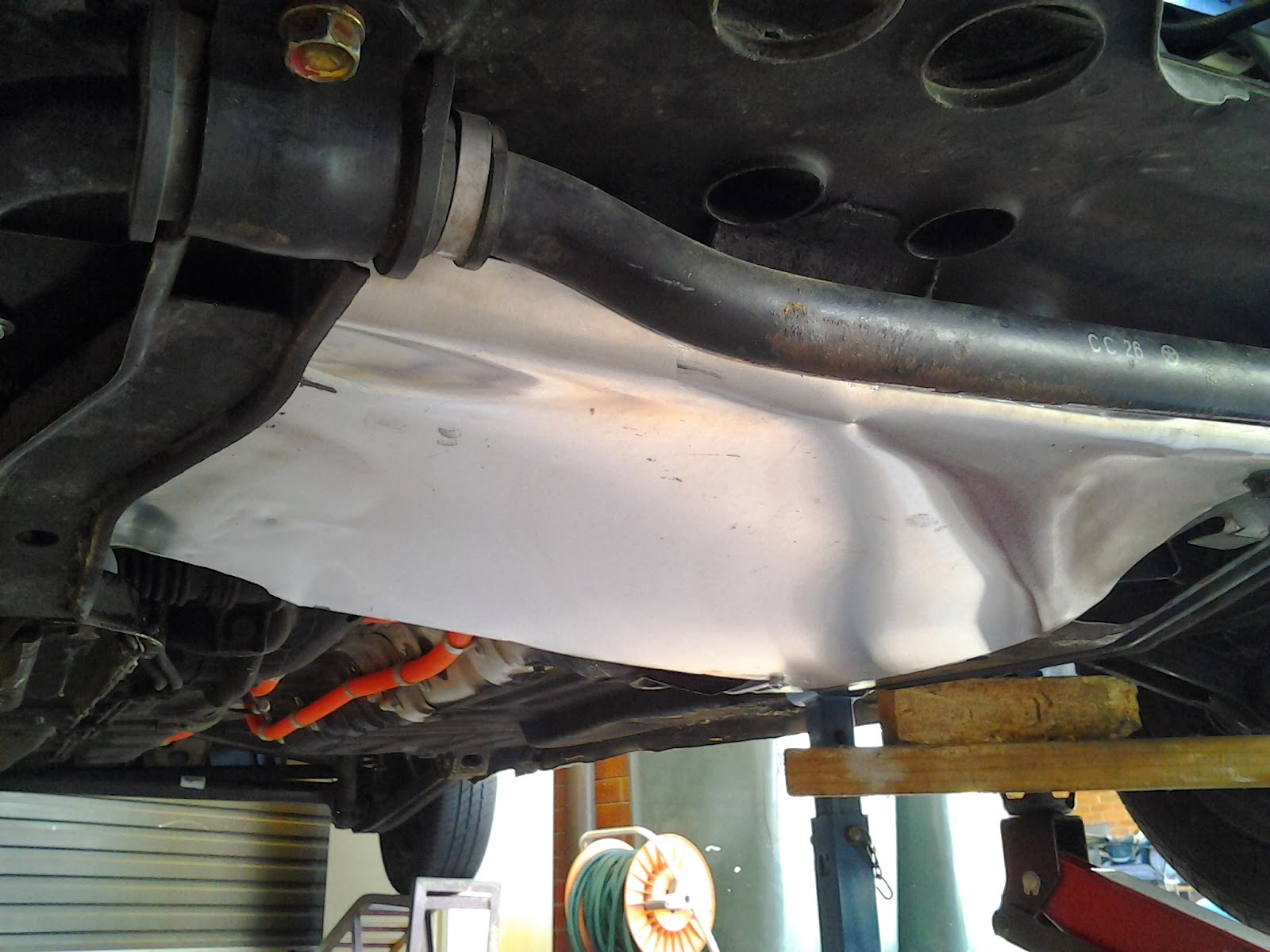 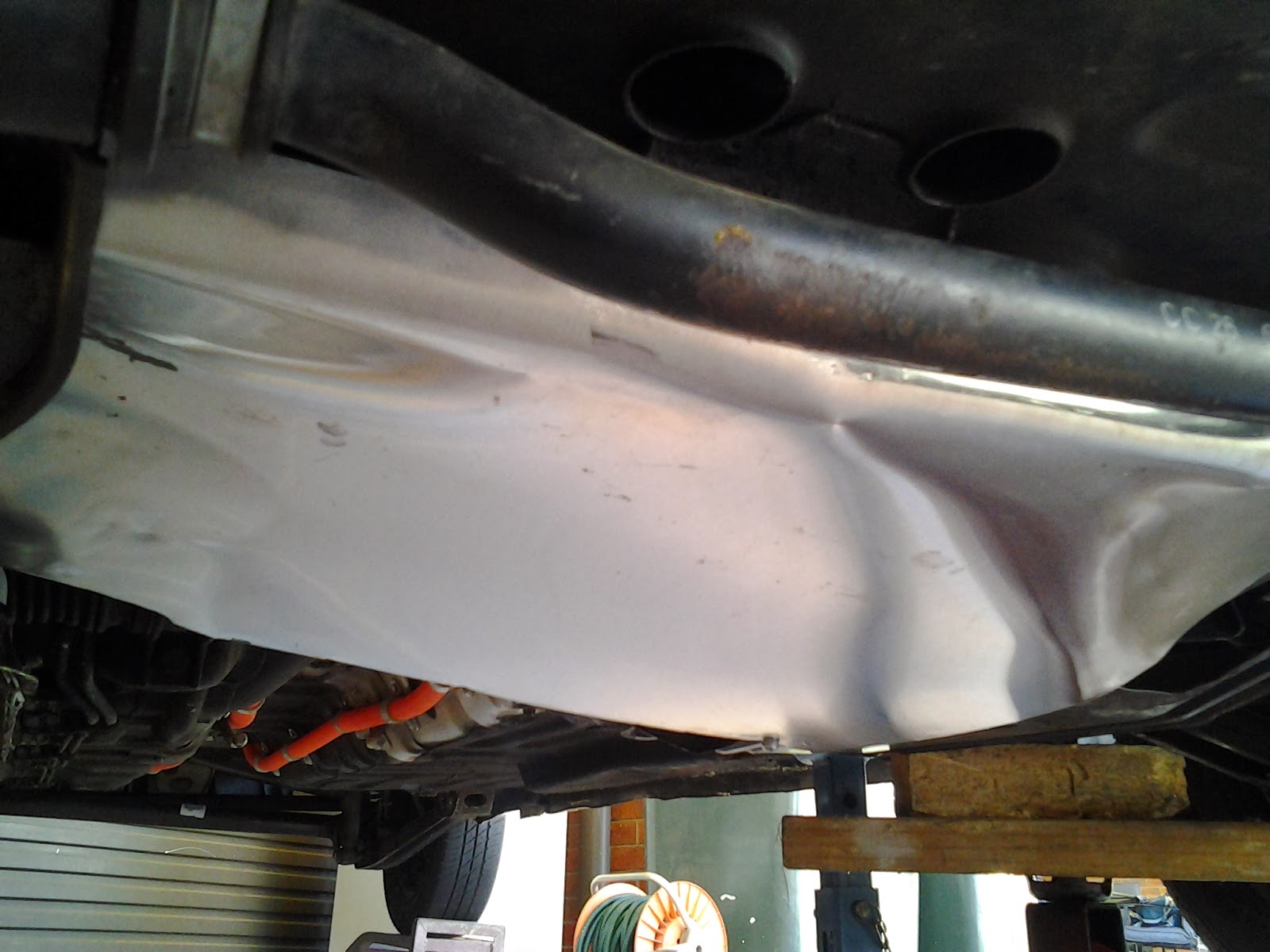 Half way through wiring connectors. Looks good here but had a disaster near end as arced across the torque wrench and wrote that off! The following two images show the spark damage to back of driver's seat & the headlining.

Sunday 29 December
I have now 3 weeks off work so some progress should be very possible.
Since last post I have hosted a gathering of the AEVA Adelaide members at my home for a Saturday BBQ & general "Gasbagging" about things EV-wise. About 22 attended which was a pretty good rollup. Not to waste the occasion I obtained  a number of handy suggestions , though these wont be visible, they are useful in the  wiring up situation. 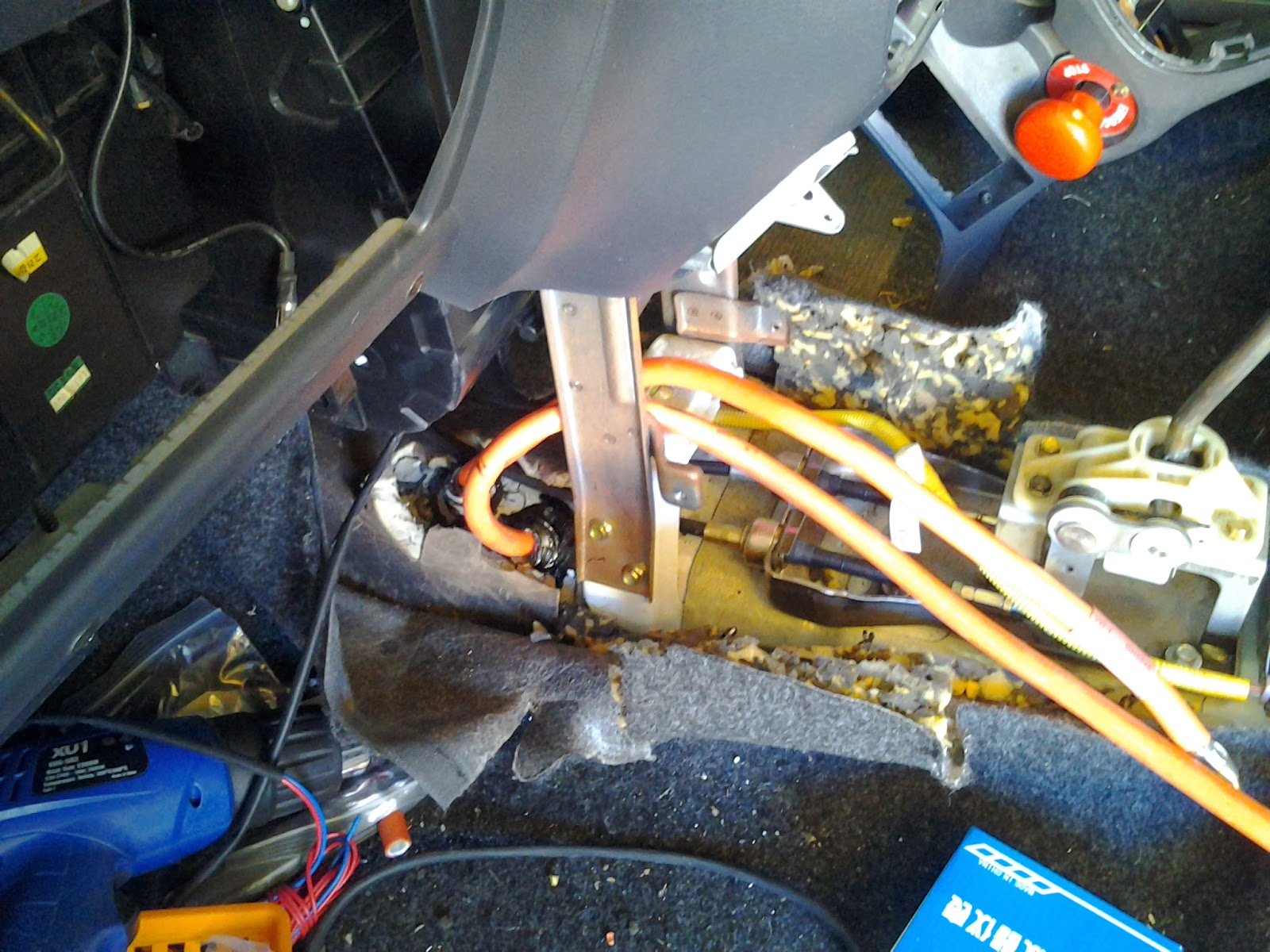 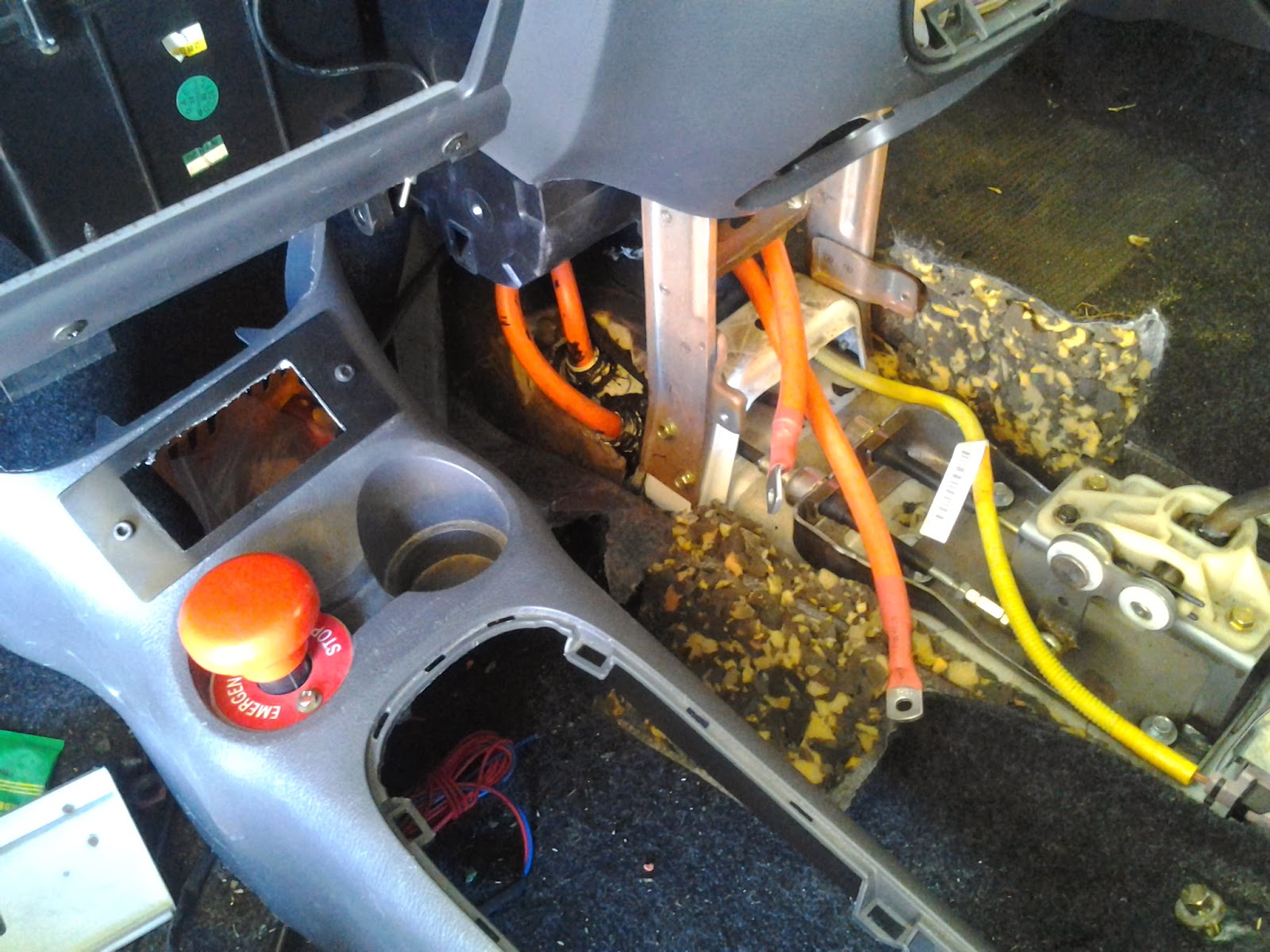 Here is the console with the emergency switch and provision for the JLD404AH Intelligent Meter. 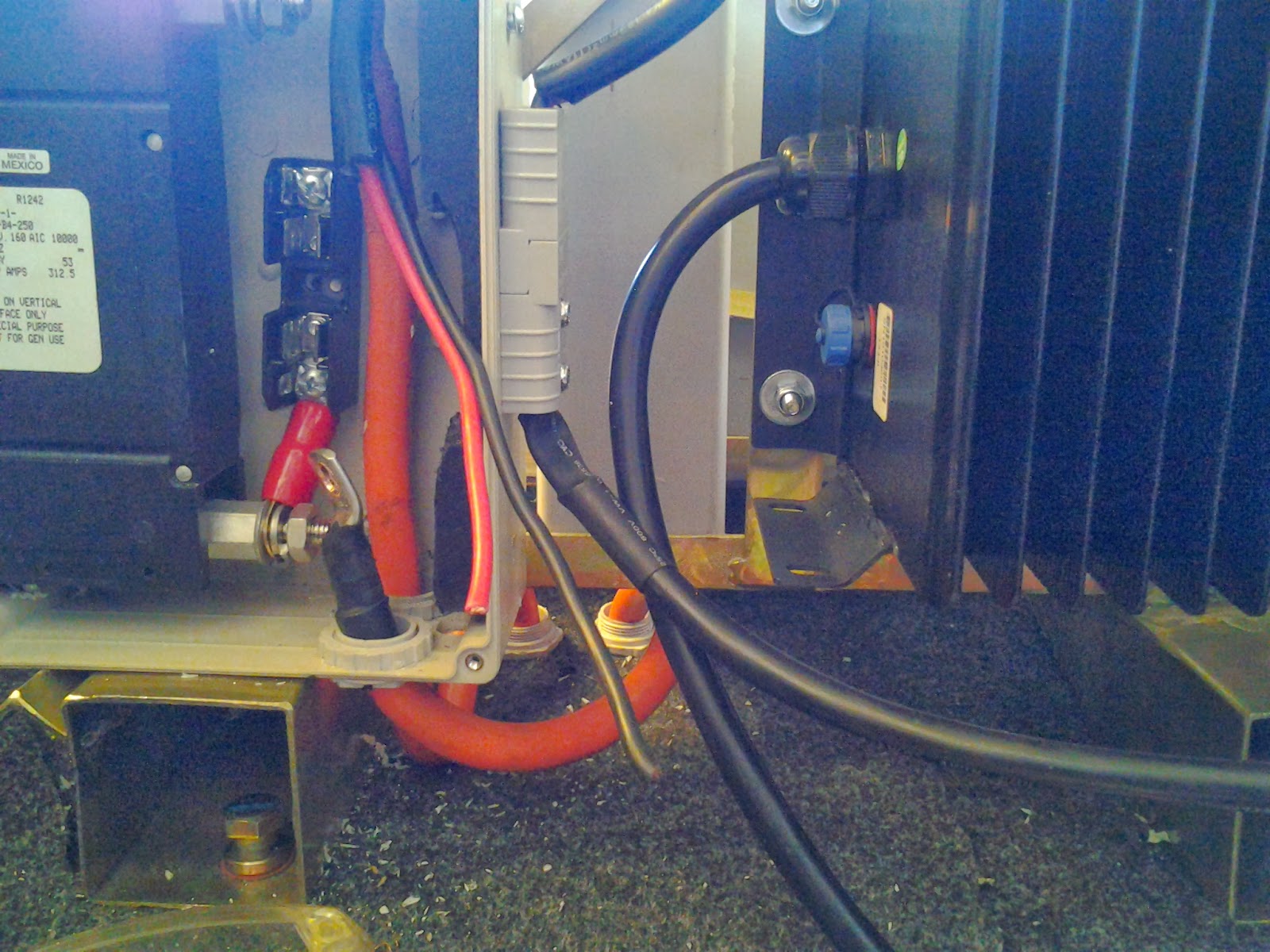 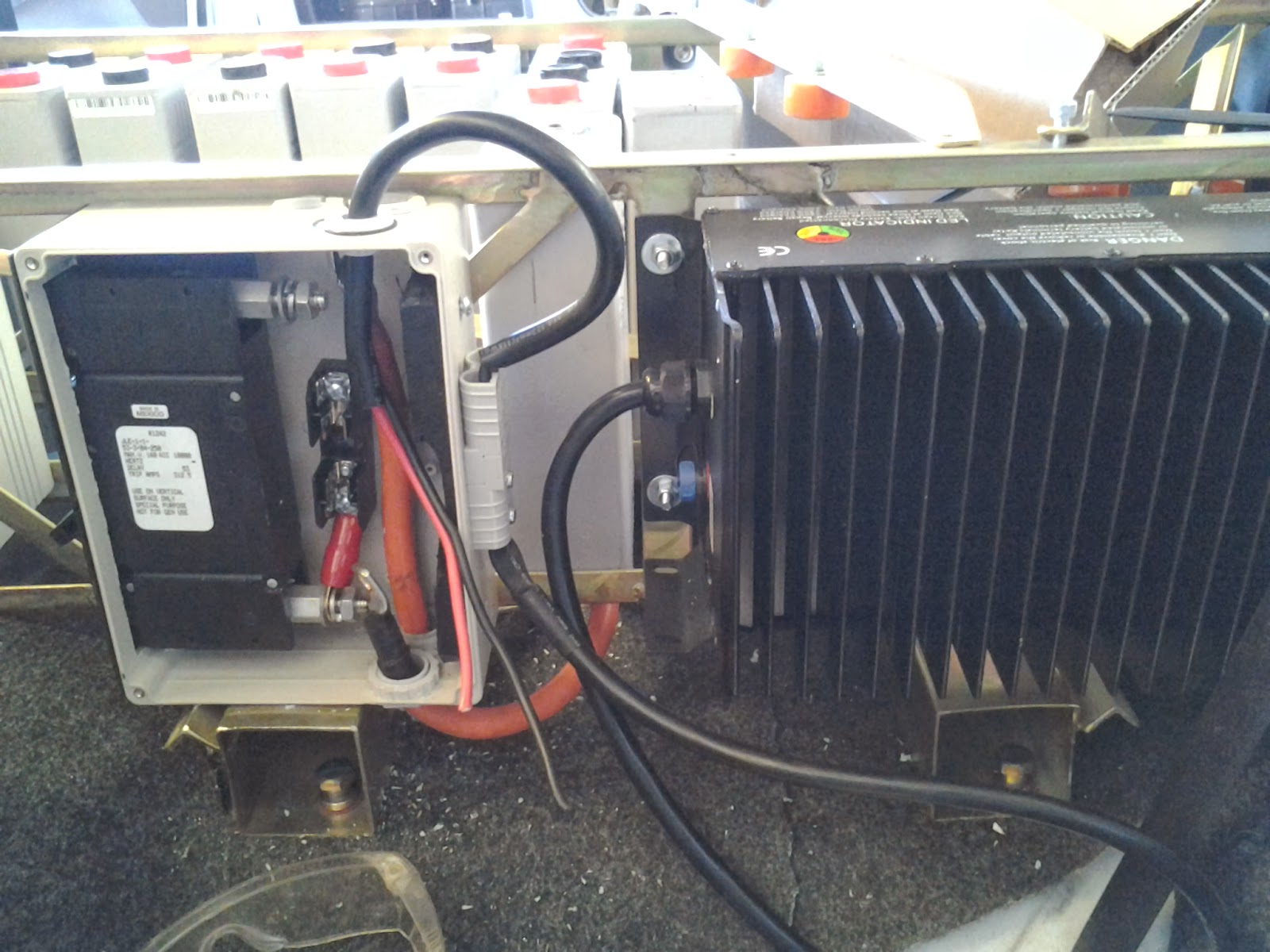 The two shots above are looking at the mounting box for the circuit breaker switch on left side of the grey box ( which will eventually have a cover). To the right is the 144v battery charger.
The feeds that  pass out to the underside of the car can be seen, as can the mounting bolts  that hold down the battery frame. These mount directly onto the seat belt mounts and ought to provide conformation to Aust. design standards for mounts.
The grey box also contains the 75mv shunt for the JLD404AH meter. The additional fuse is for 144v Neg. feed back to the meter as well. 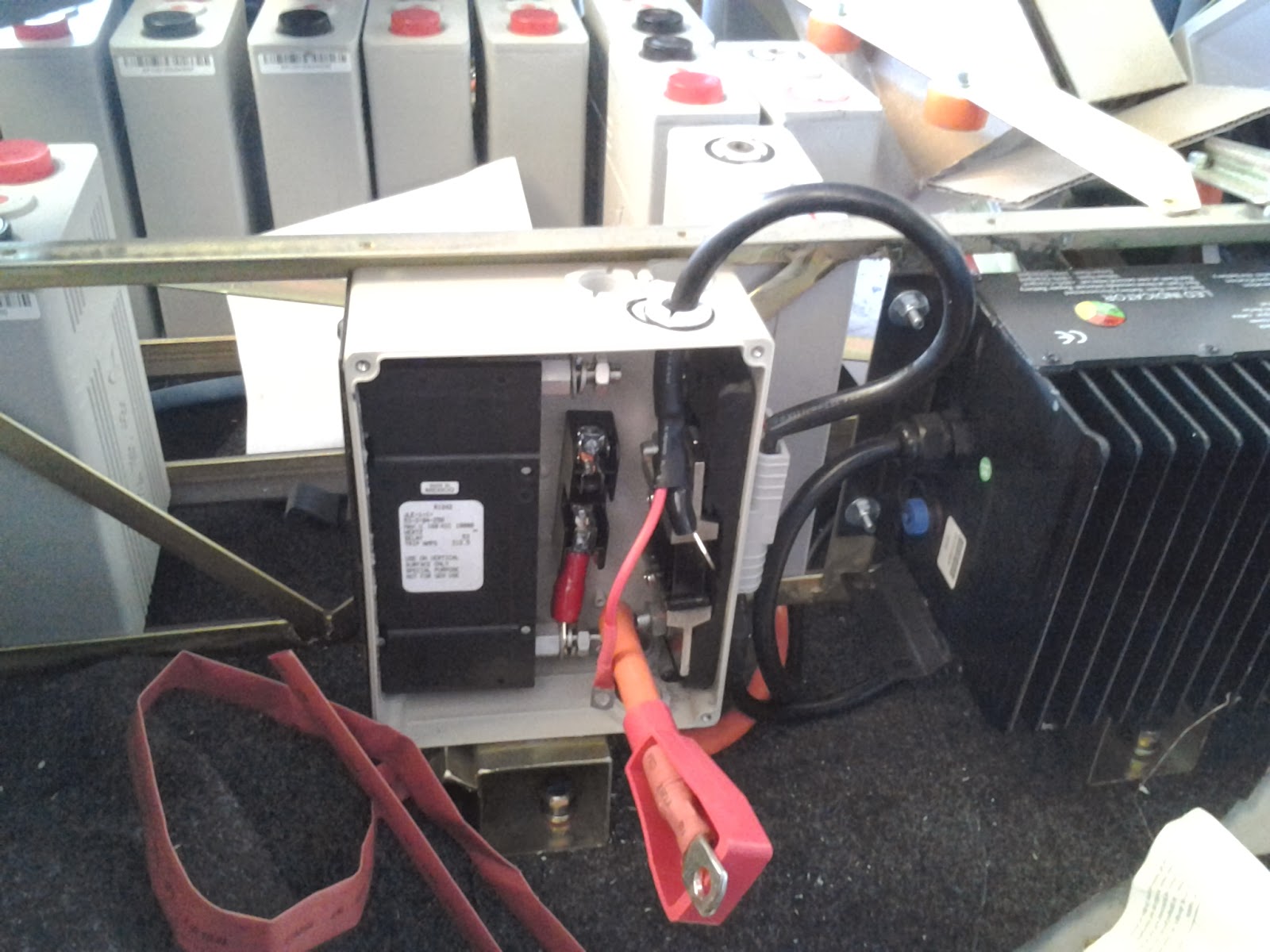 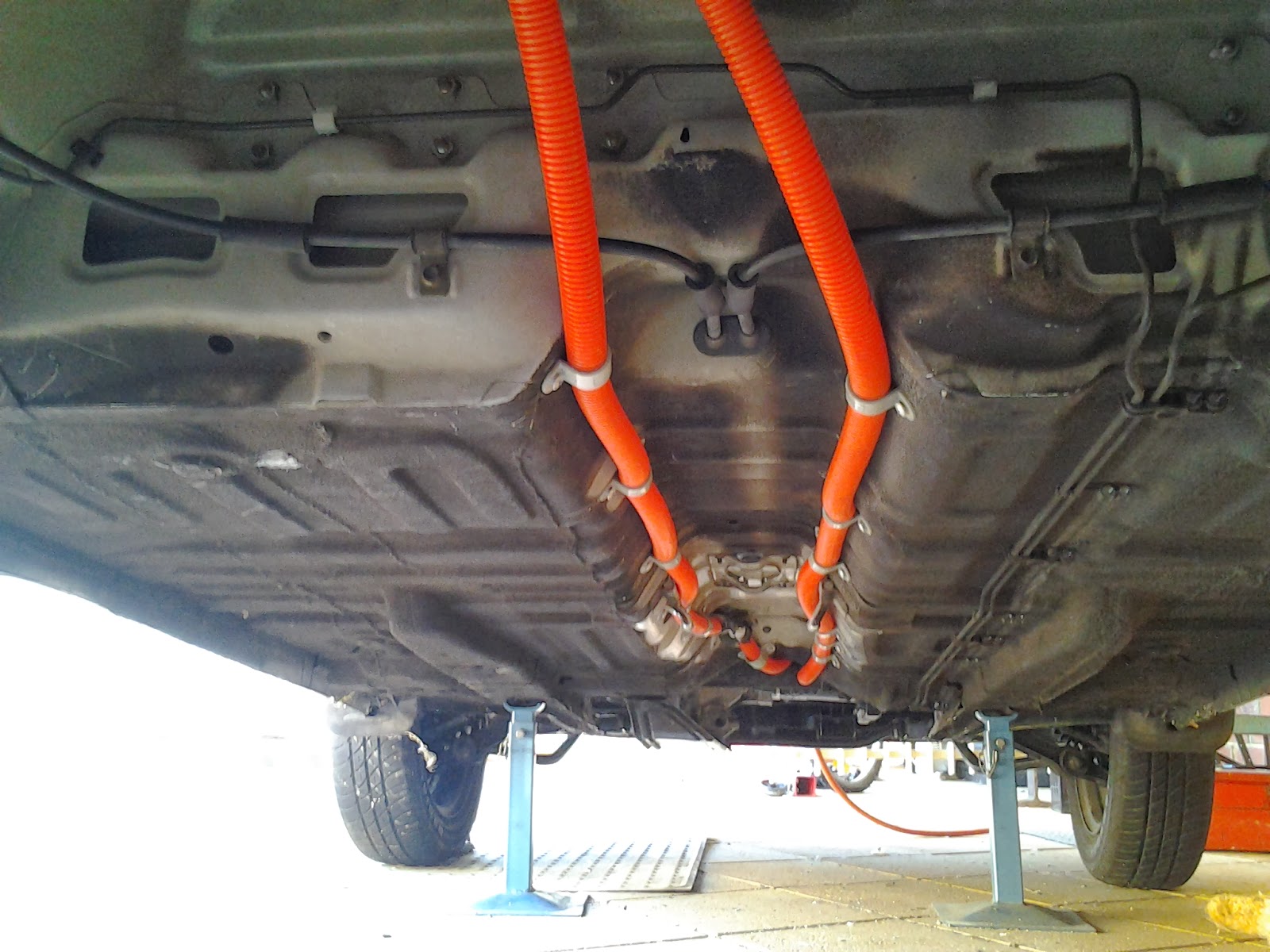 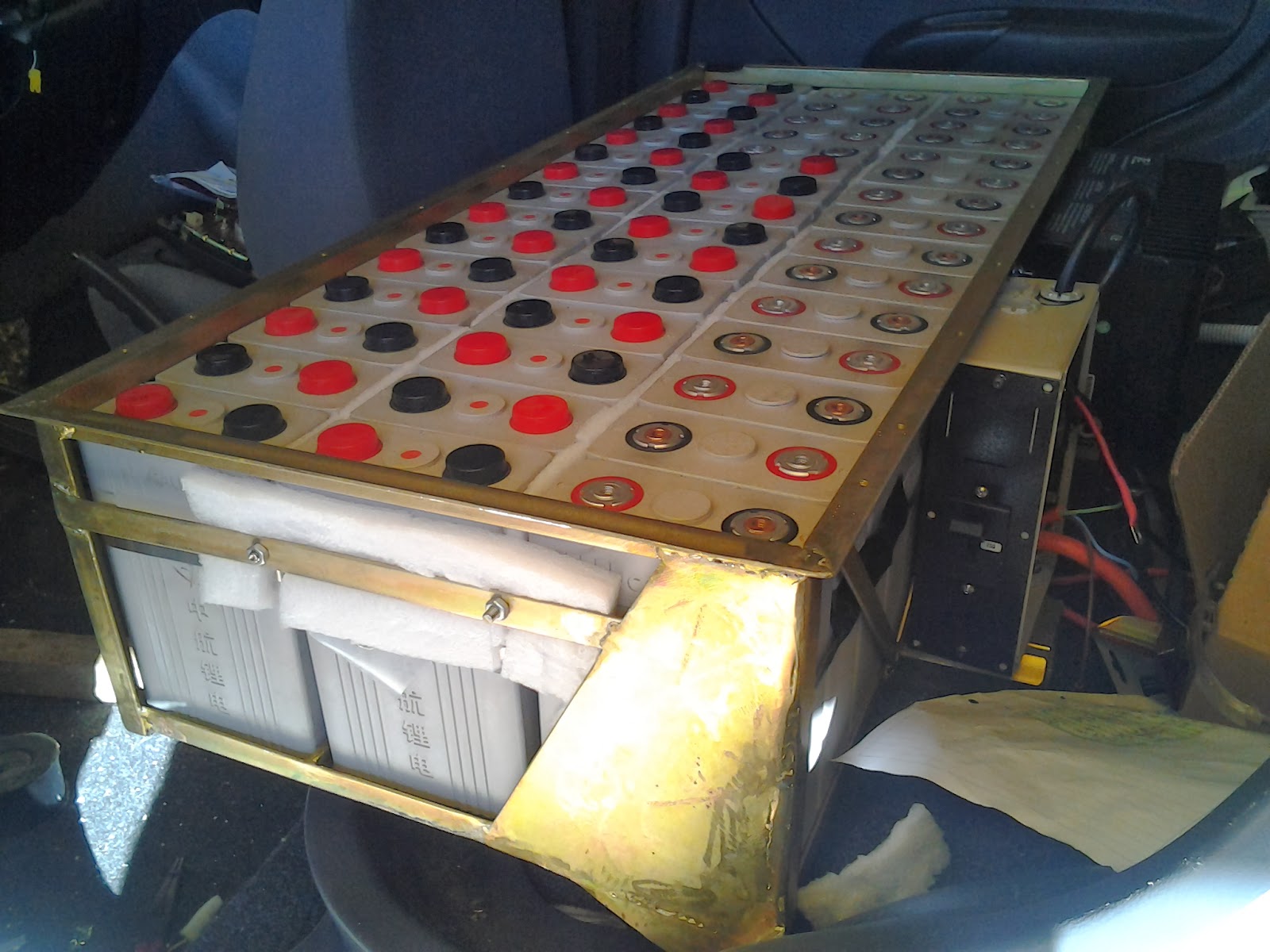 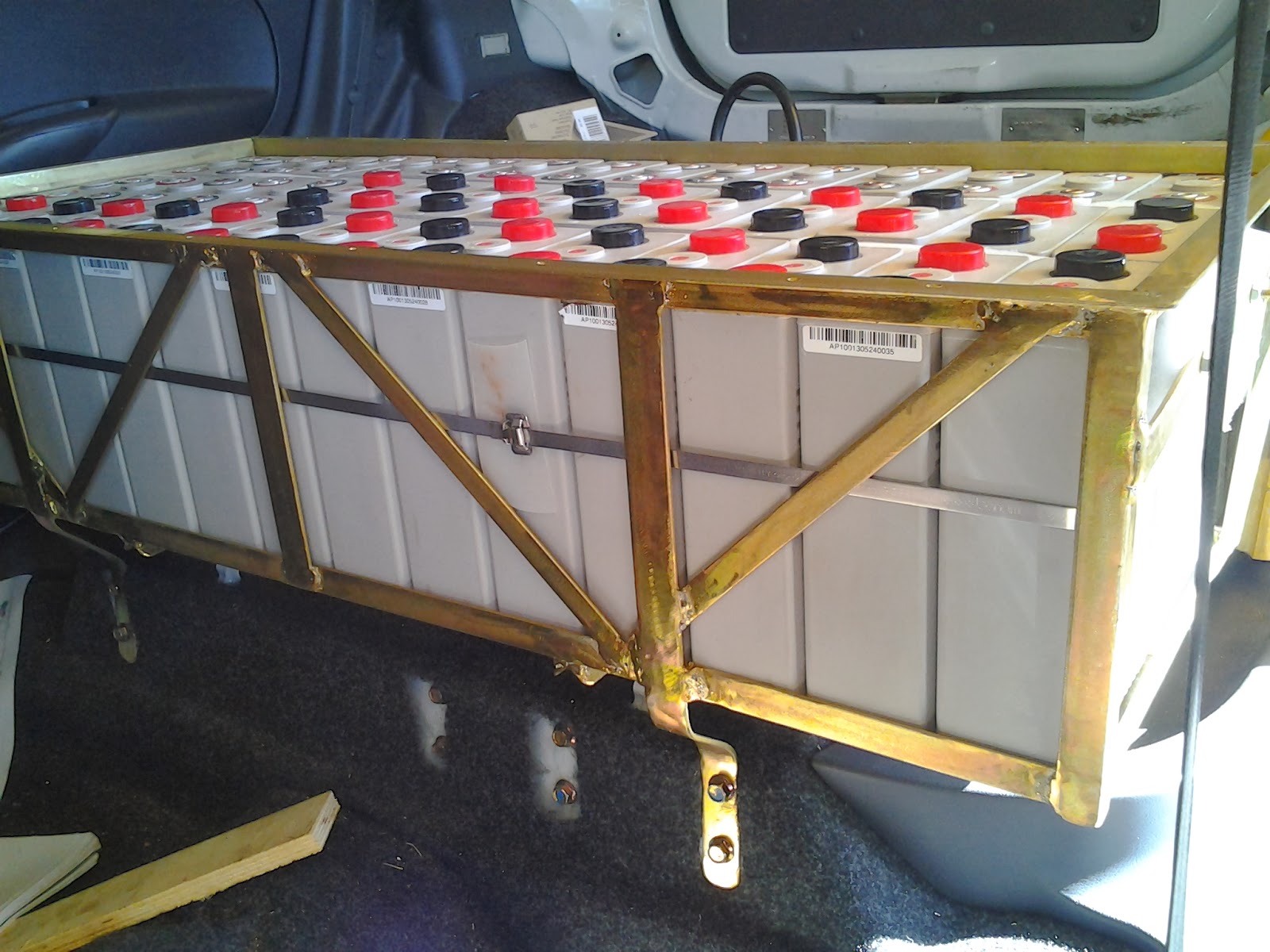 Mounting all 45 batteries in the frame . Used SS banding in 3 sets of 15 batteries.
Then, also there is a 25mm flat passing between the banks terminating on a 1/4"thread. That then passes through part of the frame , to additionally lock in the banks. Finally there are 8 hold-downs on top that will be the final method of locking in the banks into the frame. 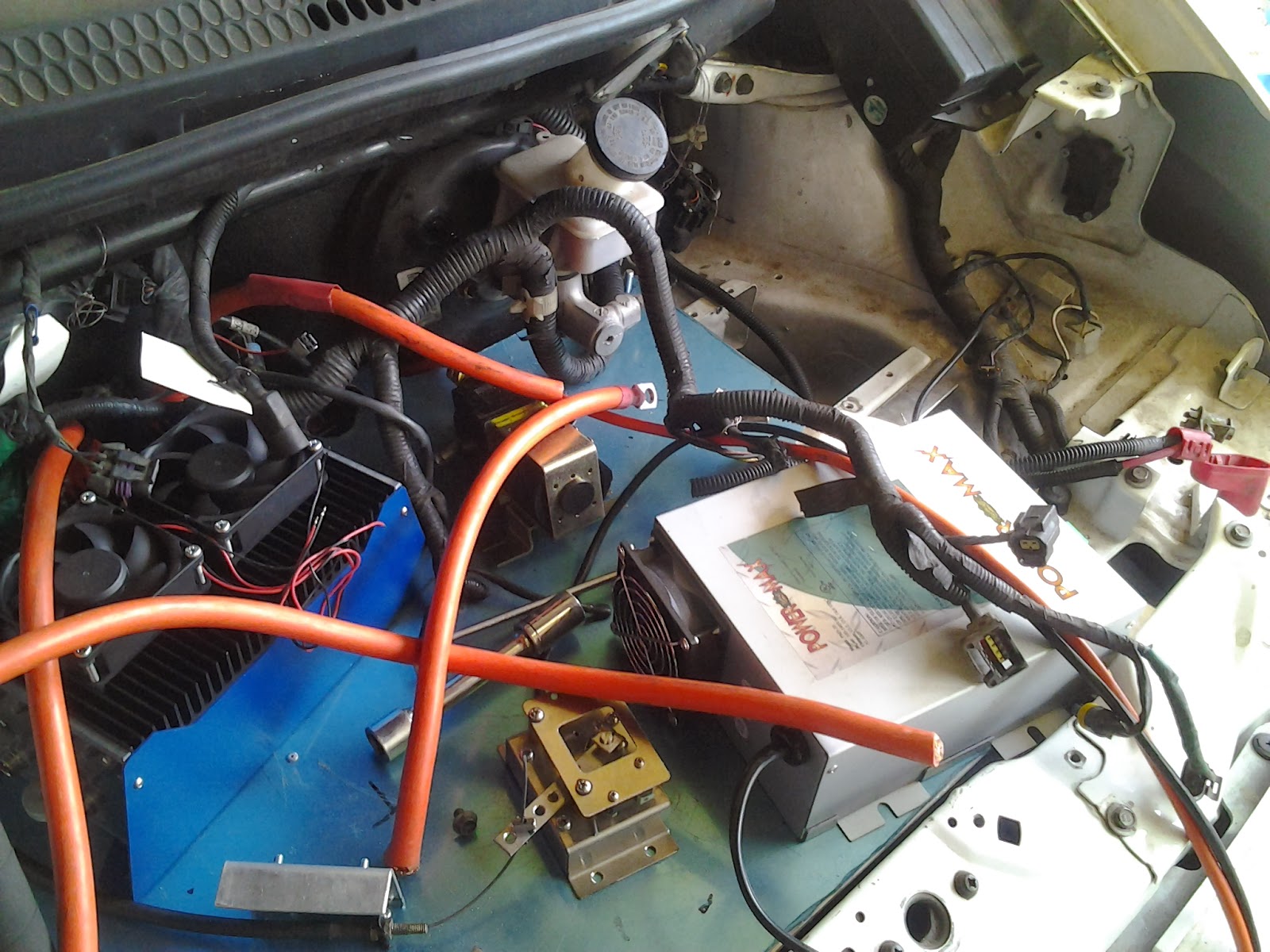 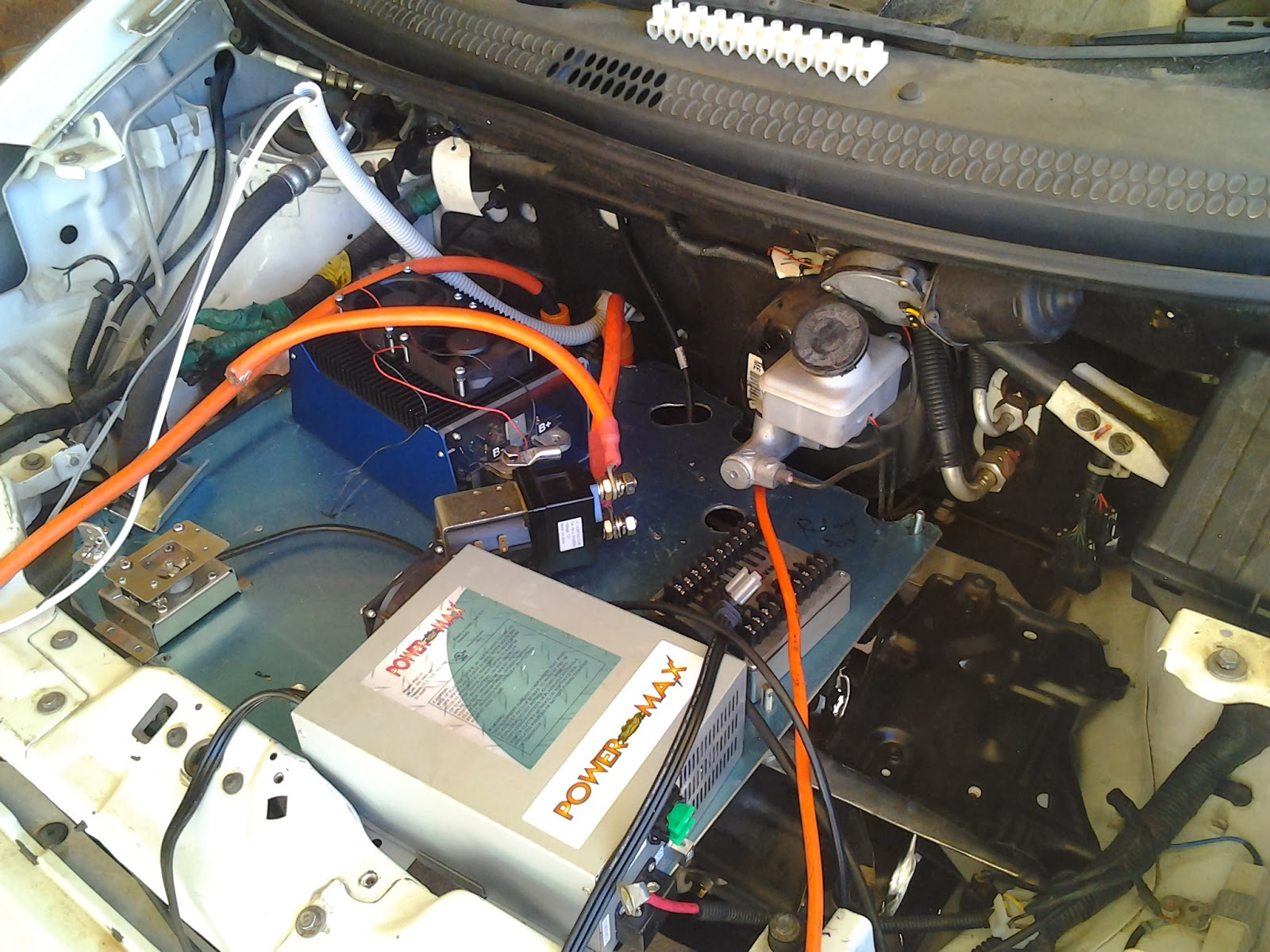 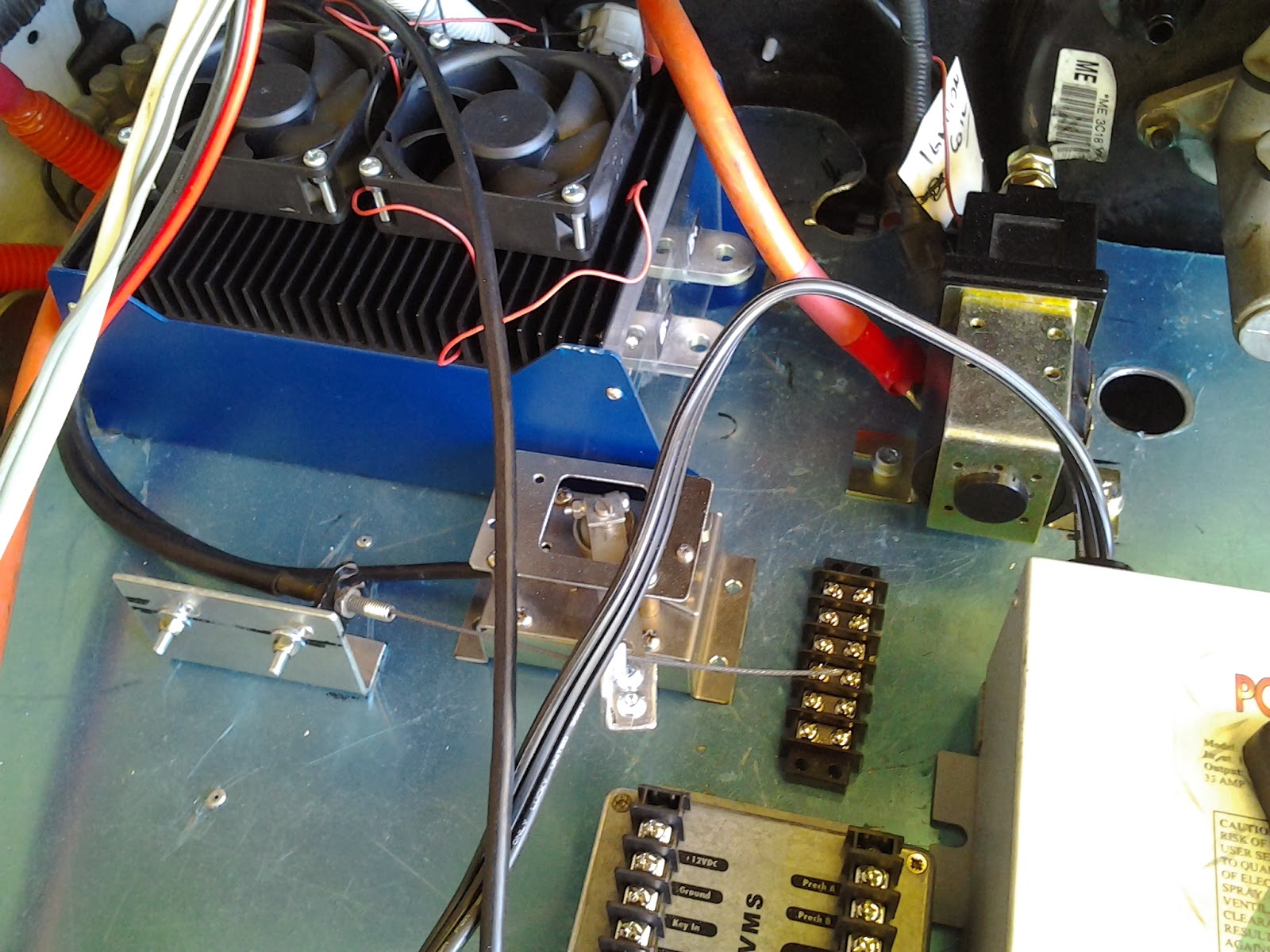 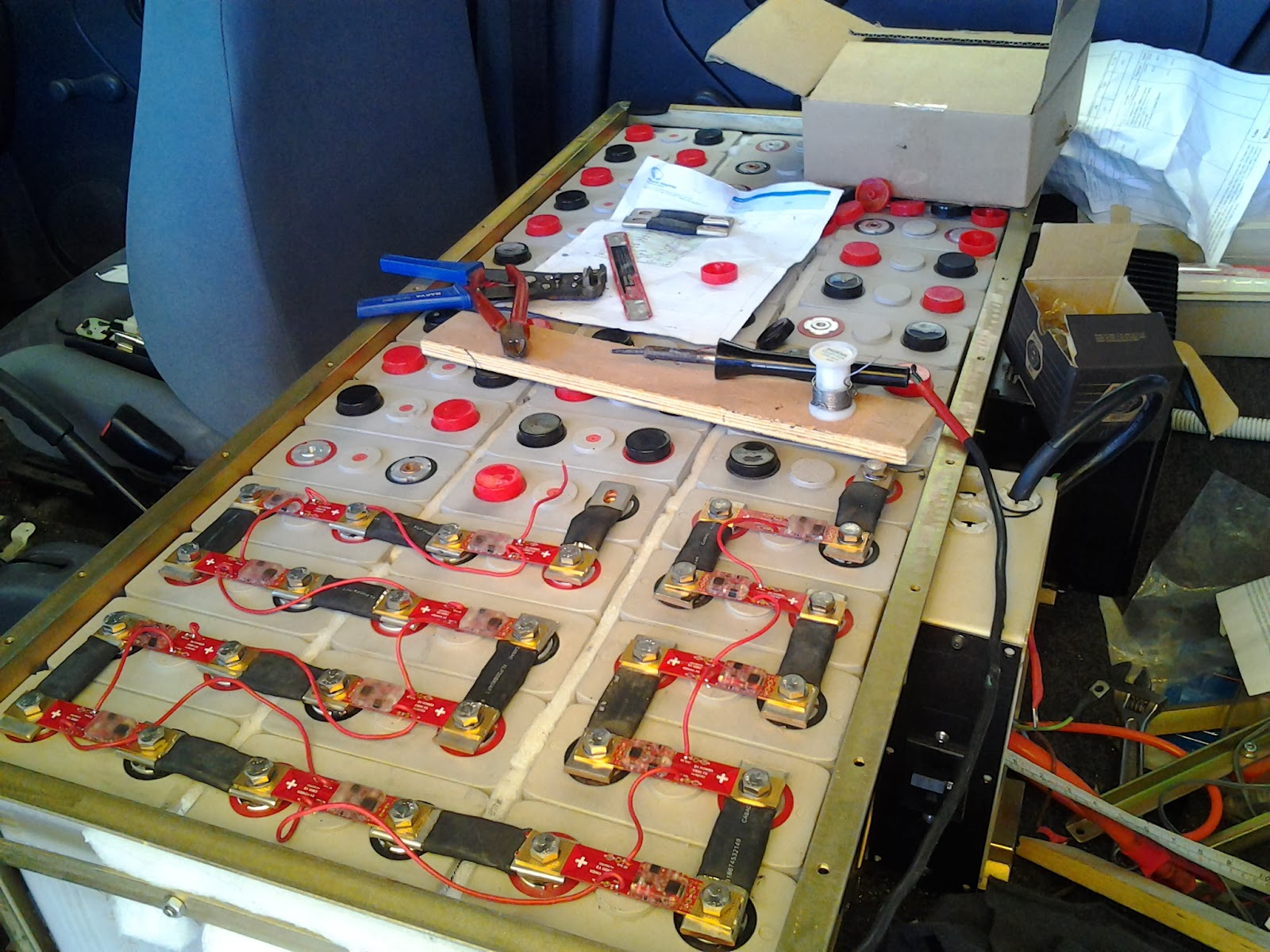 Progress also with the BMS wiring and battery interconnectors. ﻿
Posted by Unknown at 01:57 No comments: 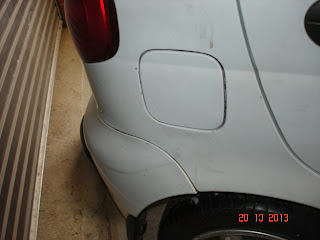 2 months further on: hardly any progress


﻿﻿
﻿﻿ After quite some time (2 months) , I figure it was time to update this blog.
First  piece of action was to get all the  welded bits etc. galvanised , both for the protection this will give but also from an aesthetic point of view.


Here are the bits returned in gold passivation - Nice eh?
Note the motor support  - problems came later when I couldn't get the left side 1/2 shaft past this! Bugger! 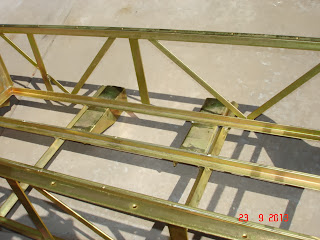 Battery  box - inside the  "runners" I have laid a strip of closed cell foam on the base  - the full length (20mm wide) and at each end. 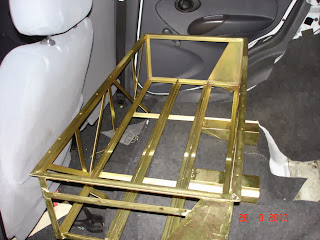 Mounted basically where the rear seats would have been. I also obtained some floor matting from a wrecker. This has been glued to the bare floor again , where the back seat was .
And here is what it might look more like once batteries are mounted.


Now at the stage of finishing the welding . The part below , is the bottom band that will mate with a further band to completely wrap the motor. Once bolted tight this should be sufficient to prevent the motor from moving (torque rotation). The support (blue steel) fixes to the original left & right engine mounts that I had stiffened by having them filled with polyurethane.
﻿﻿﻿ 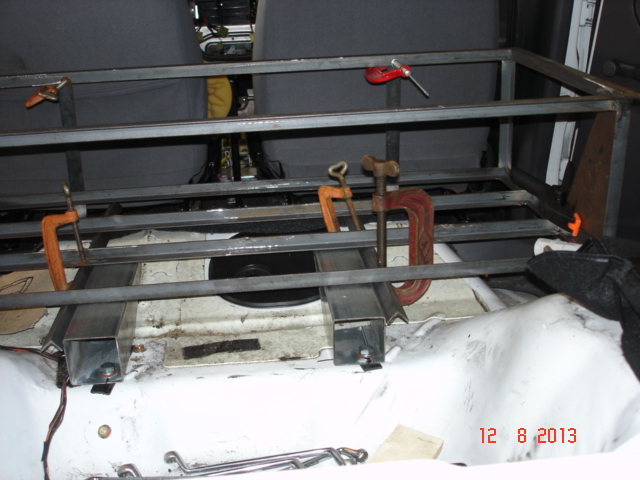 This is the view from the back of the car. I used 75x75  galvo box section to raise the rear of the frame up to the same height as the front. 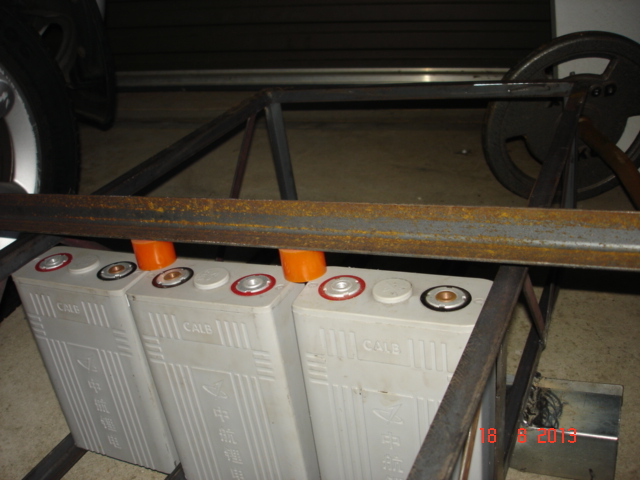 The above & this shot shows, more or less the completed frame . This will need to be passivated . I also got a lot of polyurethane pieces ( orange) these are about 22mm diam. & 27mm high with a hole in centre to take 8mm bolts. These will be perfect to hold 4 batteries at each corner , the bolt passing through an angle that will in turn be bolted to the outside of the battery frame similar to what I am demonstrating in the shot here. 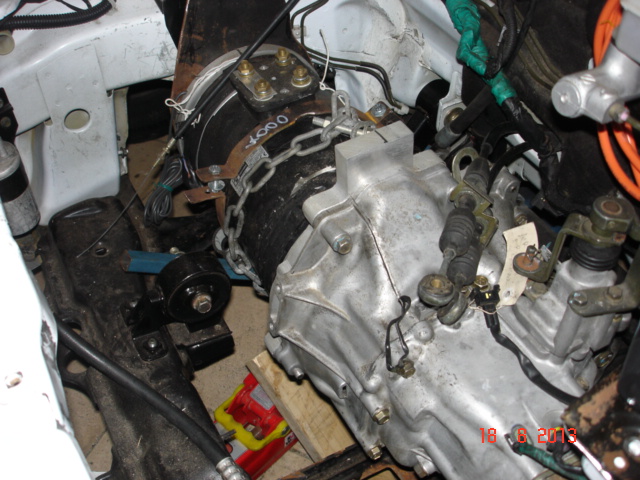 This shot is again of the engine bay which I now have to decide how I will mount the electrics! 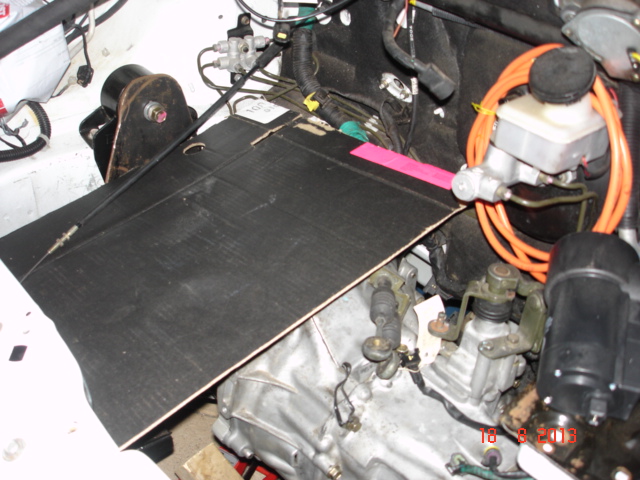 I have started with a template from cardboard and will see how I go from there. The cable laying on the card is the original accelerator cable. This will be used to connect up to a Hall Effect pot box.

Also , hard up on the right of this shot is the vacuum pump . Its not mounted - just lying there at the moment while I think about where it and a vacuum reservoir (from an alloy drink bottle) will be mounted eventually.  Probably on the right side of the engine bay as the brake servo is behind the brake master cylinder (has the orange cable presently wrapped around it.